During his tenure as director of the Dyer Center, Yusuf Dahl has created a foundation and platform for the future growth of entrepreneurship at Lafayette 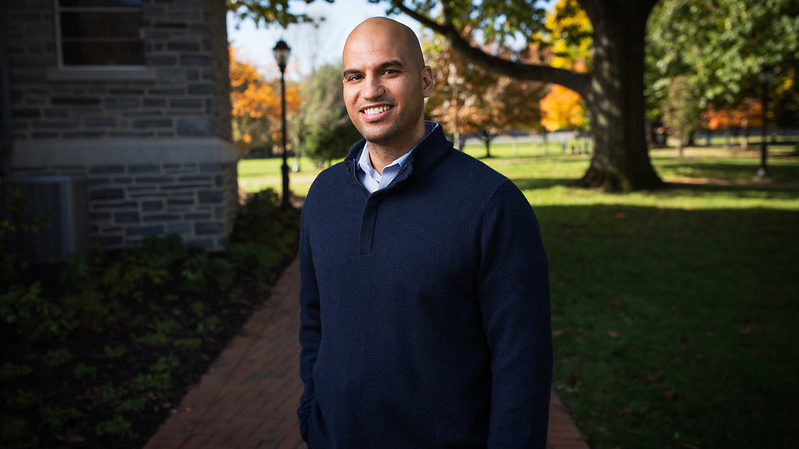 It was a sunny summer day when I made my way along the side of Acopian. I was following the directions I had been given: walk between the engineering center and parking deck, and there, behind two blue dumpsters, is a glass door.

Inside was the IDEAL Center, home to innovation, design, entrepreneurship, and leadership. The room was stark white with a barren counter and center table. Beyond some glass windows was a range of idle equipment. Sitting on a desk, wearing a brown fedora, was Yusuf Dahl, the newly appointed director, and one of the first things out of his mouth was, “We need to get out of here.” 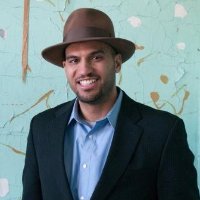 While the words may have varied over the years, as Dahl has led the center through a new name, location, spirit, and energy, the intent behind those words has remained fixed—something rife with aspiration, purpose, and clarity. Dahl has been driven to disrupt, knowing that his window of time at the College wouldn’t allow him to wait until folks were ready or tolerate an attitude of “that’s not how we do things.”

That summer day, after our brief introduction, he hopped off the desk, rolled up his sleeves, and started to articulate what needed to happen in order to move the center forward.

Pivot (Before Pivot Was Cool)

Dahl began his tenure at the center using a trio of activities: engaging powerful alumni, finding student fellows to help guide the work, and bringing new activities to the center.

“Yusuf starts with a ‘go’ mindset,” says Robert Young ’14, director of intercultural development. “He has an idea, tries it, sees if it will grow legs and align partners. He doesn’t get stopped by all of the red tape. Instead, he sought to evolve what the center could be and how to position it with students, align it with the curriculum, and attract passionate people.”

That wasn’t always easy, as some liked what the center had been while others worried that the center would focus on business-type principles.

Still, Dahl was eager to transform the approach and build a best-in-class center, all while dispelling the notion that entrepreneurship meant selling a product or only appealing to engineering and economics majors. 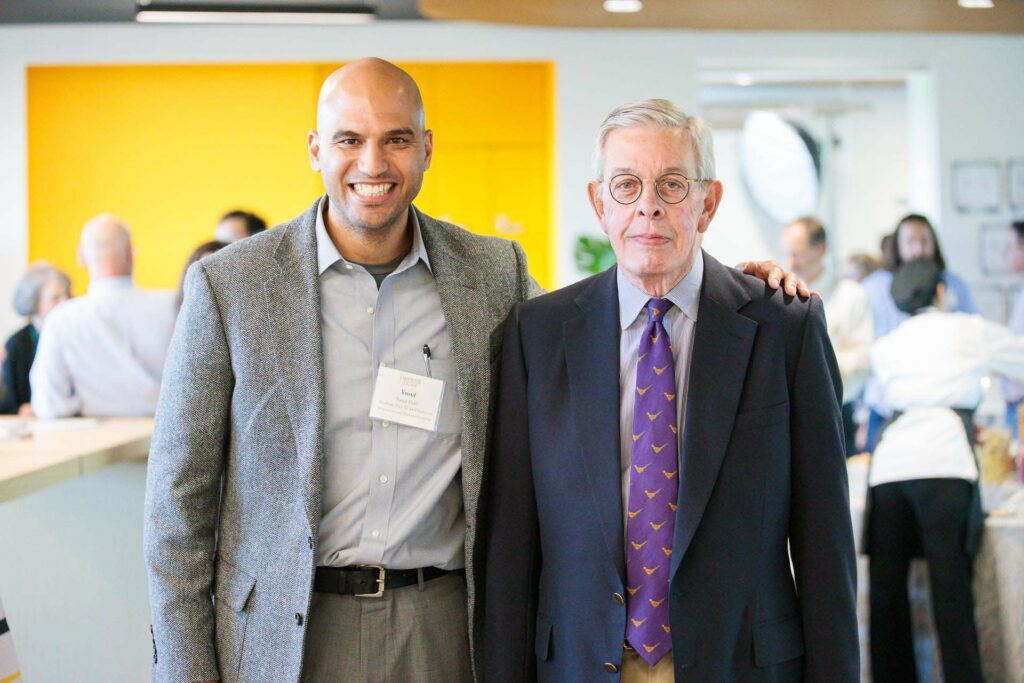 Into the start of his second year, alumni had noticed the shift and stepped up to help. That’s when Bradbury Dyer, III ’64 made a $6 million gift to rename the center and endow the director’s position. The Dyer Center for Innovation and Entrepreneurship would be anchored on the entrance level of the new Rockwell Integrated Sciences Center.

By this point, the center was in full stride as students won regional business pitch competitions and found support in the newly created Bergh Summer Accelerator, a summer program sponsored by a gift from Chip Berg ’79, president and CEO of Levi Strauss & Co., designed to help startup ideas turn into practical ventures. 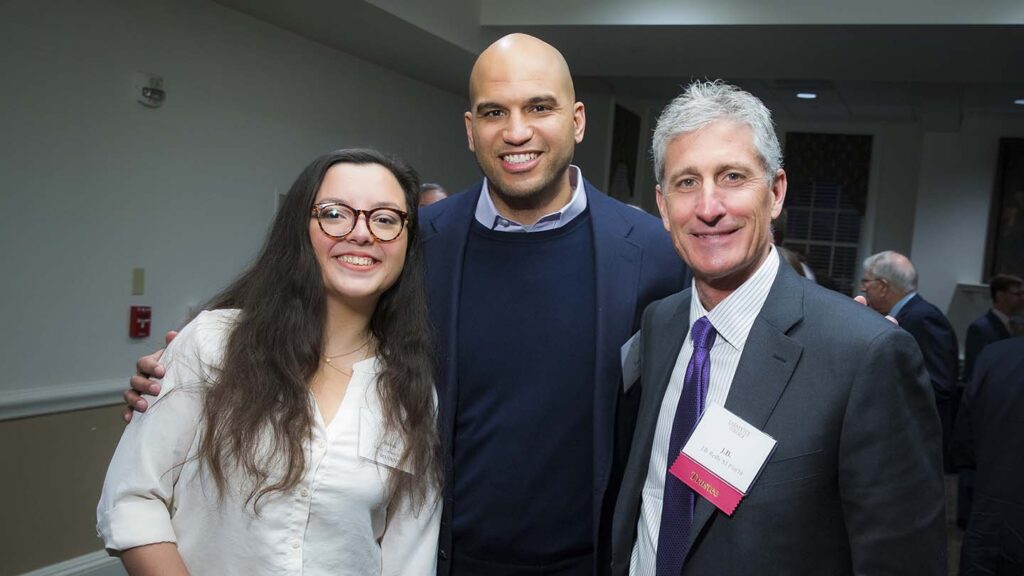 “When Yusuf was hired, a group of alumni met with him outside the College Hill Tavern, where we talked about integrating real estate into the curriculum,” says J.B. Reilly ’83, a notable Lehigh Valley developer. “The large number of students committed to taking on this challenge around midterm speaks to their desire to grow, learn, and gain exposure outside of traditional classroom activities.”

The disruption Dahl brought to his work didn’t always make people comfortable, but Dahl did tap into his strengths.

Real estate is part of Dahl’s lifeblood. It altered the course of his life when he bought, fixed, and rented a two-family property in a troubled neighborhood in Milwaukee, Wisc., during the start of the housing bubble.

What began with a single house grew into more than 200 residential and commercial units in the city’s most challenged neighborhoods. Dahl founded Milwaukee Metro Management, an award-winning affordable housing development and management company. 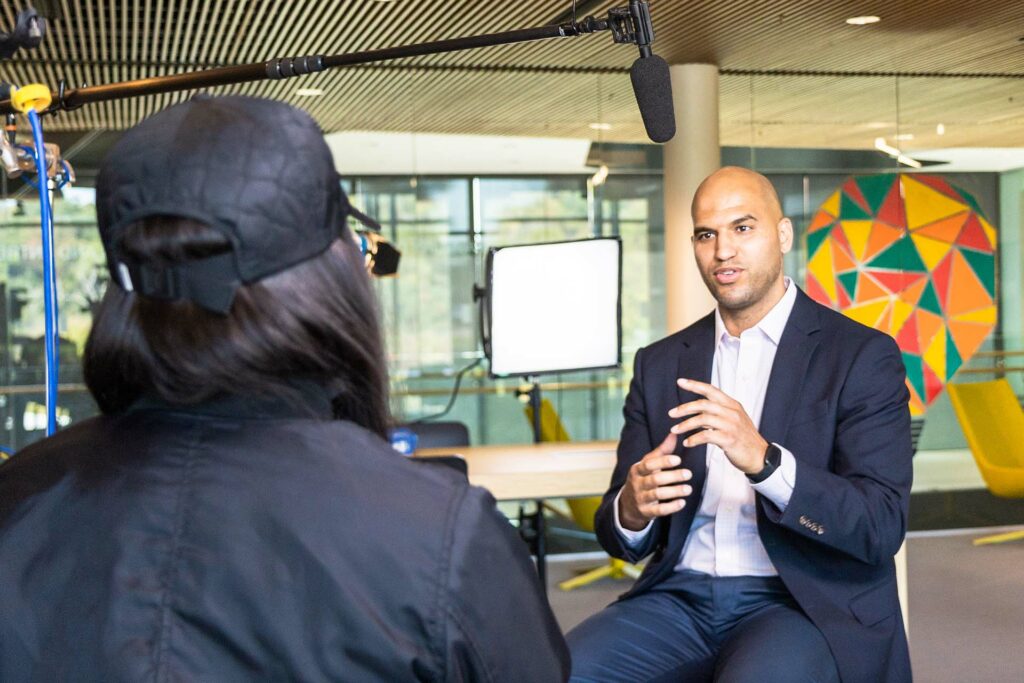 While folks connected to the College had heard some of that story and how it led him to a master’s degree at Princeton University, Dahl’s full story wasn’t as well known until the folks at Good Morning America (GMA) decided it should be shared with the country.

Soon, a part of his life he rarely discussed—poverty, crime, juvenile detention, drug dealing, prison—was known to all. Maybe the hardship he escaped and hustle he displayed might gain him some traction with people on campus and off as he continued to embed innovation and entrepreneurship into more facets of the Lafayette experience.

“What he probably didn’t know was how his story positioned him as a ‘possibility model,’” says Cristina Usino, associate director of admissions for multicultural recruitment and college access. “As folks like me took the Dyer Center messaging out on the road to recruit future Leopards, his story helped ignite prospects who didn’t want their dreams silenced by financial barriers or who didn’t think others would see the possibility in their potential.”

Today’s applicants regularly put the center and entrepreneurial ambitions as key reasons to attend the College.

The GMA story also showed him as a single dad, raising his teenage daughter and pushing her to achieve her full potential.

As the Dyer Center took to its new space in Rockwell Integrated Sciences Center, student workers were asked to create a maker space, so they researched what other centers had, looked at what was available on campus, and then proposed the tools to offer at Dyer.

“Yusuf created more opportunities for students to engage in experiential learning and leadership,” says Janice Egan, director of parent and family engagement and philanthropy. “He sought students across all disciplines, and what he helped produce was multifaceted.”

Such was the case as the pandemic altered the internship landscape. When students were looking for opportunities, Egan tapped Dahl on the shoulder to assist a group of parents who were wanting to help.

Born were the data analytics boot camps. The 10-week program focused on non-STEM majors who could benefit from a set of skills that would make them more competitive in the job market.

“When the boot camp idea took hold, we needed supportive campus partners,” says Daniel Miller P’20, who served as co-chair of the Marquis Parents Council when the boot camps were created. “We worked with Mike Summers in Gateway and Yusuf Dahl. They did a ton of work behind the scenes, helping the idea take shape and leading it to a positive outcome. Yusuf just makes people believe because he is thoughtful, committed, and works hard.”

Those boot camps not only have remained in place even as internship experiences have returned, but also have expanded to include another offering in digital marketing.

Another expansion into the curriculum emerged thanks to the Entrepreneur in Residence. The center welcomed external practitioners to campus to help guide students and teach a course. The first was on social entrepreneurship, which spurred student innovation across the College. The second course is currently underway in pharmaceutical innovation. 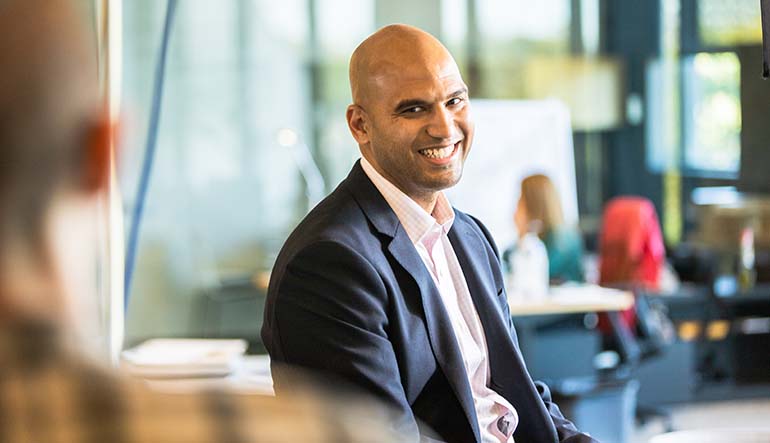 These continued additions helped the center earn recognition regionally for its programming and land as a finalist for the Global Consortium of Entrepreneurship Centers awards.

As the center began to move beyond its walls, Dahl sat at the helm. By this point, two student-led clubs had solid footing: Lafayette Consulting Group and Collegiate Entrepreneurs Organization (CEO).

He had connected with other student-focused centers on campus and helped them leverage common approaches to growth and programming.

“Yusuf helped broaden the scope for what we do at the Landis Center for Community Engagement,” says Art Kney, professor of civil engineering and former director of Landis Center. “He saw how our two centers could work together and do more good for our community partners. He is such a dynamic individual, who is able to take a problem, conceptualize it, and see numerous approaches to solve it. Our center is now following parts of the Dyer blueprint as we work to create courses and support student fellows.”

Beyond campus, Dahl wanted to find inroads for students into local industries and tap those leaders into seeing all that Lafayette had to offer, so he formed an advisory council of regional industry leaders and companies at the center, designed to support the next generation of thinkers and leaders through education, interdisciplinary projects, job placement, and career experiences.

Dahl turned to a regional leader for help.

“Yusuf had a vision for what he wanted for students at Dyer, and together we made an amazing list of senior leaders who were diverse in industry, role, and culture,” says Eric Luftig, senior vice president at Dorman Products Inc. “Yusuf is not one to just do things because that is how it is done. He talks about what success looks like and how to make it happen.”

The biggest things he has made happen should impact the campus and valley community for years. 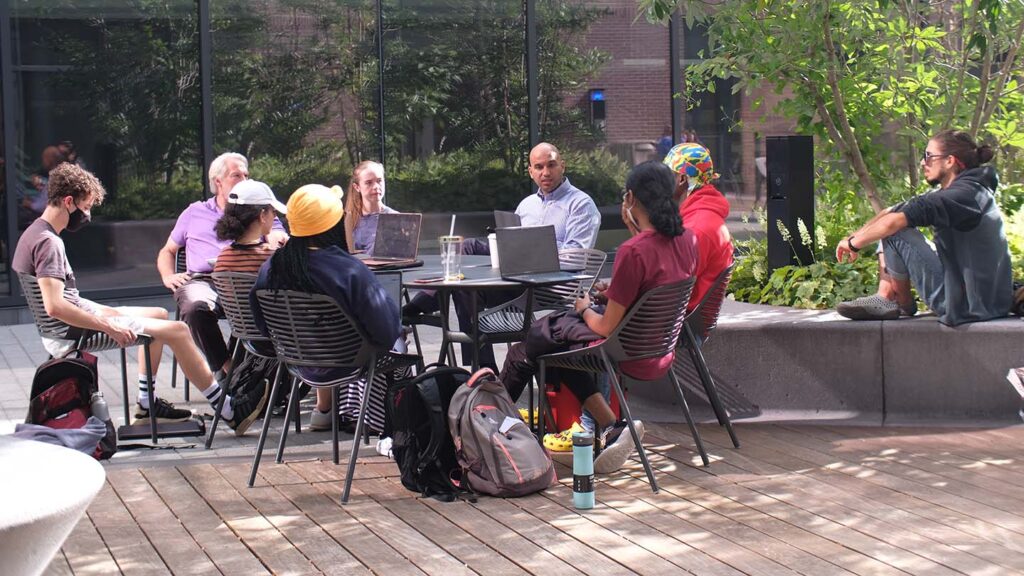 On campus that impact comes from the D.Y.E.R. Fellowship, a four-year program where select student fellows enhance entrepreneurial thinking and skills, hone personal understanding, leverage hands-on ventures, and develop broad-based networks. Fellows earn a monthly stipend. For those who move through the rigors of each year, their junior year culminates with a $4,000 investment in an entrepreneurial venture.

Off campus that impact comes in the form of the Real Estate Lab, a venture between Reilly’s City Center Allentown and the Dyer Center, where Allentown residents learn how to invest in real estate and manage properties. More importantly, they are given access to the resources and capital needed to become real estate entrepreneurs and lift themselves out of poverty.

“Entrepreneurship is risky, contrarian, and filled with trial and error where you take chances and try new things. Yusuf brought that to the Dyer Center, and students have responded well to it,” says Reilly. “He created a foundation and platform for the future growth of entrepreneurship at Lafayette.” 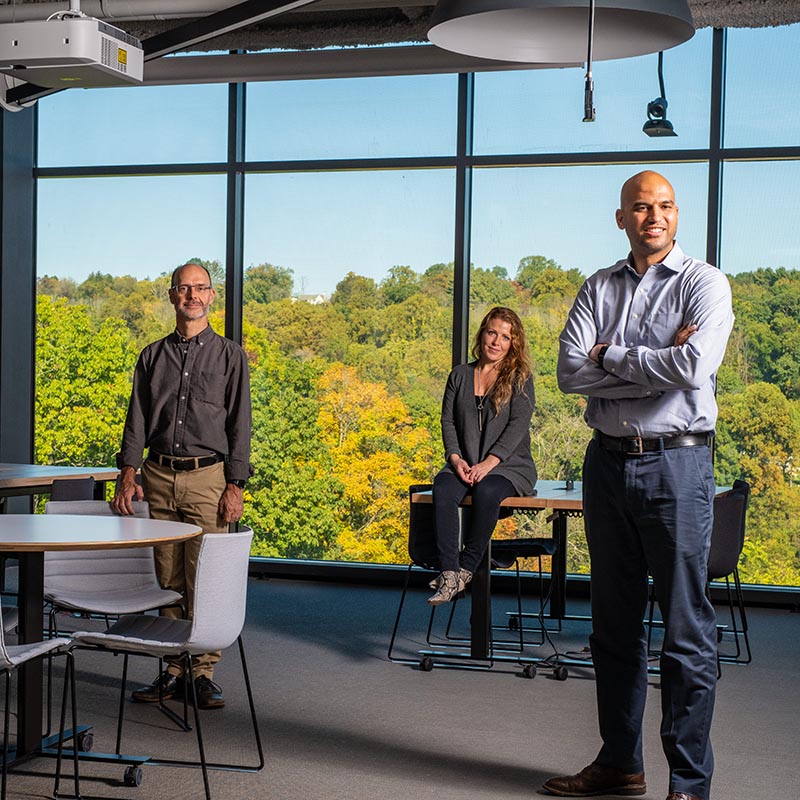 No one knows this more than the person who stood by his side and worked in the center throughout his tenure, navigating all of the projects and Yusuf-isms. She knows from all the work behind the scenes that the heart he has poured into the campus, students, and community was motivated by his commitment to having an impact and helping others.

“Yusuf has never spoken in ‘I’ terms,” says Jolene Cardassi, administrative coordinator for Dyer Center. “He has made it clear that there is never any success without support from those that you are surrounded by.”

Support is clearly something Dahl has been able to attract throughout his career because of his vision and who he is as a leader, thinker, and doer.